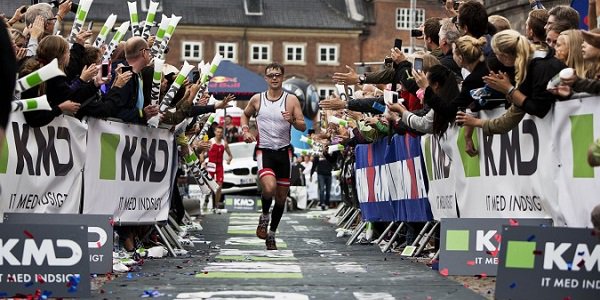 The KDM Ironman Copenhagen gets underway this Sunday and sees thousands of competitors from all over the world come together in the Danish capital to see who can suffer the most as they cycle, run and swim around the city for the cheering masses.

There are many idiotic sports in the world. Golf is a particularly silly waste of time, the pole vault is a circus trick gone awry and the less we say about synchronized swimming (unless it’s “Release the sharks!”) the better. Even the sports that Danish gambling laws concern themselves with on a more regular basis can be a little suspect. Football is a thinly veiled tribal war, horse racing is animal cruelty with an audience and anyone mentioning ice hockey with a straight face needs to go puck themselves.

Of course whilst soccer picks up the award for the most passive-aggressive sport in history (“What? I barely touched him, Ref……”) the one that represents self-abuse is the triathlon which is a combination of running, swimming and cycling that stresses endurance over raw power. Each component is in of itself a reasonable manner in which to compete, and indeed all three would be fine if it were spread over several days, but no, these fools do them consecutively as they shall in the Ironman Copenhagen.

The basis is simple enough, simply swim 3.8 km, get out, hop on a bike, cycle 180km and then finish the day by running 42.2km for good measure. Just thinking about it makes my legs ache. Over 3,000 competitors from 55 different countries have signed up for Sunday’s race and are expected to be cheered through the streets of the city by up to 200,000 spectators. Now whilst the competitors are bizarre enough, the spectators worry me more than a Reno Rousso fan with a machine gun.

Ironman Copenhagen Not So Wonderful, Wonderful?

The 200,000 people who’ll turn out on Sunday to watch the Ironman Copenhagen must have a twisted sense of fun. There is, of course, nothing wrong with going to watch sportsmen and women compete for titles, medals and prizes, especially if you like to bet on sports in Denmark, but when it takes on the form of such manifest and evident self-flagellation as the triathlon you can’t help but wonder if the spectators aren’t just there to watch other people suffer immense quantities of pain.

Hundreds of iron men set out for the 3.8 kms of swimming

Of course overcoming that pain barrier is a large part of the sport, to keep going even when you’ve already done so much and have so much more left to do. The 225 competitors from the UK know this as do the 216 Swedes, 131 Germans and 49 bods from Ireland who are competing. Even the single entrant from the small Caribbean island of Saint Nevis & Kitts knows. The question is, is it worth it?
Certainly the human body can be made to do amazing things, but should this be one of them?

Naturally I don’t ask Triathletes to justify themselves, their pastimes are their own business, but the involvement of spectators is more troublesome. There will be children present. Shouldn’t we be keeping such obvious torture as the Ironman Copenhagen out of sight? I realize it’s tricky to hide 3,000 people on bicycles, but even so. What people do in the privacy of their own homes is one thing, to do it on the streets of a European capital next Sunday seems a tad gauche. Won’t someone think of the children?

Is the Ironman Copenhagen just bread and circuses?

Naturally self-harm tends to draw an audience. Even the potential for harm is enough. Oh certainly people get spanked a bit in boxing, but that’s hum-drum, what humans prefer is some sort of unintended or unexpected harm. We might none of us click on the YouTube clip of someone blowing their own brains out, but footage of a car crash? Big explosion? Aviation accident? No problem. For the same reason we watch Formula One for the crashes, people only watch Triathletes for the retirements.

People who finish the Ironman are truly of iron. But how many people break trying?

There is nothing so rewarding for the non-sporty amongst us to watch a highly trained athlete collapse from exhaustion short of the finish or pull up on the side of the road with a duff ankle, pulled muscle or sudden cardiac arrest. It does us good to know that all the training and hard work that they put in for events like the Ironman Copenhagen, and that we once thought about briefly whilst eating chocolate cake, didn’t do them a damn bit of good. Their sweaty puff-puffery coming to naught.

So this Sunday, whilst you tuck into your lunch, just think about the 3,000 lunatics slogging their way through the three events of the Ironman Copenhagen, each one gambling news of the massive traffic disruption their public display of sadomasochism administration hasn’t spawned a militant driver terrorist organization. You can, of course, wager on athletics at ComeOn! Sportsbook, but given their current reputation for drug abuse you might want to stick to the thinly veiled tribal warfare instead.