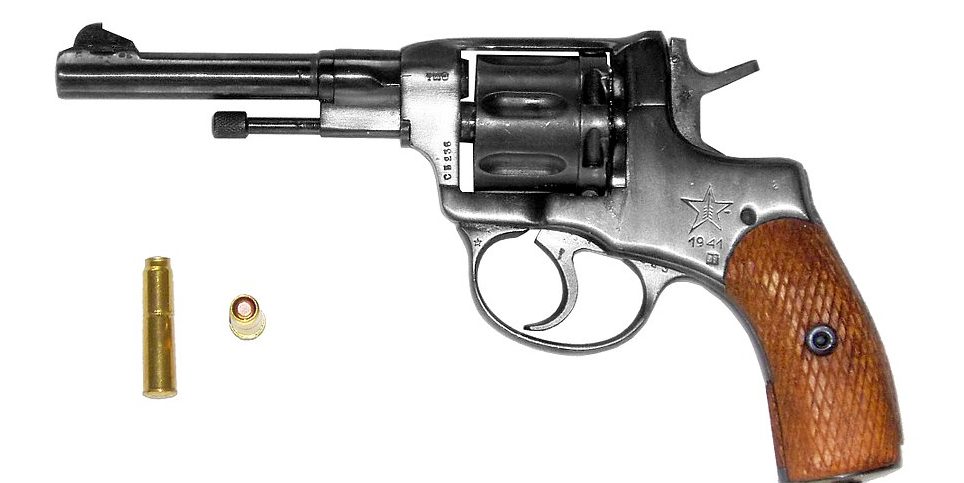 So what are the chances of dying playing Russian roulette? Like many forms of gambling, it’s a game of chance. But with this game, the loser takes the ultimate loss. So, first spread some plastic sheeting over the floor so it’ll be easier to clean up afterwards. Now let’s have a dive into the mechanics, math and lore surrounding this most excellent of games.

Pressing the cold steel barrel of a loaded gun to your temple, and then pulling the trigger must certainly take balls of steel. It’s also a great way to learn about probability and to instill discipline into unruly children.

One of the greatest war films to ever come out of the US was Michael Cimino’s 1979 “The Deer Hunter.” It tells the story of three best friends from small town Pennsylvania enlist in the US army in 1968 to fight in Vietnam. Captured as prisoners of war, they are forced by their Vietcong guards to participate in a game of Russian Roulette. They play with three bullets in a revolver with six chambers. After the hammer clicks three times, they are able to turn the gun onto their guards and finally make their escape. Each drop of the hammer ramps up the tension. Ultimately there is no happy ending. One of the characters is traumatized and unable to move on. Some years later we find him in Vietnam making a living from gambling with Russian roulette. It doesn’t end well.

The Beginnings of the Game of Russian Roulette

As the name implies, it’s beginnings were in Tsarist Russia. Pistols, in particular revolvers, were becoming popular from around the 1850’s. During the 1920’s we can find more and more written accounts of the use of revolvers as their use became more prominent. In the novel, “The fatalist” of 1840, part of the collection A Hero of our Time by Mikhail Lermontov, a Russian poet and writer, he writes of an army officer who believes there is no such thing as no predestination. In order to demonstrate his theory, he empties the powder from all the chambers of a revolver bar one. Pressing the pistol to his forehead, he pulls the trigger. Having nothing happen, he then points the gun at his service hat hanging in the window. A shot rings out and the room is filled with gunsmoke.

But the actual term, “Russian roulette” was first coined by the Swiss author, Georges Surdez, in 1937. Inspired by tales of daring do from the French Foreign Legion, he wrote a short story called “Russian Roulette”. It’s the tale of a young German recruit who’s trying to cover up a suicide and takes the form of a letter addressed to his superior officer. According to this, it was commonplace for Russian officers to pull out their revolvers, extract one bullet from the chamber, press the gun to the temple and pull the trigger. Later in the story, he demonstrates the game by leaving a single bullet in the chamber. Like playing poker, then have a look at these online poker sites in the UK.

Some Math: The Chances of Dying Playing Russian Roulette

How about playing the game whereby the barrel is spun just the one time at the beginning of the game and then passed back and forth without being spun in between? The question here is whether there is any advantage of going first or last. Or, if more than one player is involved, maybe in the middle? Now most people believe that the longer the game, the greater your chance of shooting yourself in the head. Keep in mind that most people also have very little understanding of how probability works. Let’s have a look….

Take a revolver and place one live round into the cylinder. Give it a hefty spin, and whilst it’s still spinning, knock it into the gun’s frame. Place the cold steel barrel against your temple. Close your eyes and clench your buttocks. Think of all that you love about life. Like your IKEA furniture. Pray to your gambling God. Then pull the trigger.

The first round means that there’s a 1:6 chance of the bullet meeting your skull. With the second player those chances go up to 1:5. But…don’t forget that if the first player splatters their brains over the living room wall, then the second player doesn’t have to play. (And I bet you forgot that!). So…you’ll be needing to multiply the chance of a bullet in the chamber with the possibility of having to play, then you’ll be able to calculate the risk of dying during each round. Just like playing Party poker.

As you can see, the chances of dying playing Russian roulette, remain the same. It really doesn’t matter when you take your turn in the game of Russian Roulette. Now you’ve survived that, have a look at some UK poker news. Though the odds are still worse than those of being eaten by a shark.

One would intuitively think that the first player to take a turn is in the greatest danger of dying but as these calculations show, it makes no difference. It would certainly be an interesting situation, if all the chambered had come up empty, leaving just one, the one that everyone knows is loaded. And it’s your turn! Please step onto the plastic sheeting on the floor. Thank you. Still in the land of the living? Then cheer yourself up with a punt on PartyPoker. On a serious note, if you want to shoot, then try trap shooting.