The History of Greyhound Racing in the UK

Greyhound racing is an organized and competitive sport that is similar to horse racing in some parts. There are two forms of races, traditional track racing, and coursing. Coursing is the pursuit of hares by sight. Greyhound racing is similar to horse racing in that both sports are pretty popular with sportsbook betting. Even though the sport is slowly declining, there are some countries where the professionals take it more seriously than elsewhere. The history of greyhound racing in the UK is very interesting and it even intersects with the gambling industry.

The history of greyhound racing in the UK up until today

The modern form of greyhound racing involving oval tracks and artificial hares came to England in 1926. At first, however, it seemed like it was going to be a failure as supporters were hard to find. Charles Munn and Major Lyne-Dixson owe their success in the UK to Sir William Gentle and Brigadier General-Critchley. The money they raised was to launch the Greyhound Racing Association that operated until 2019. Soon after the founding of the company, there were over 40 greyhound racetracks in the UK. Betting has always been a big part of greyhound racing, just as in horse racing. In the 1930s, the races were already popular in England. The sport reached its peak in 1946 in the UK with an estimated attendance of 75 million. The UK Betting and Gaming Act of 1960 is regarded as the primary reason for the decline of greyhound racing in the country. 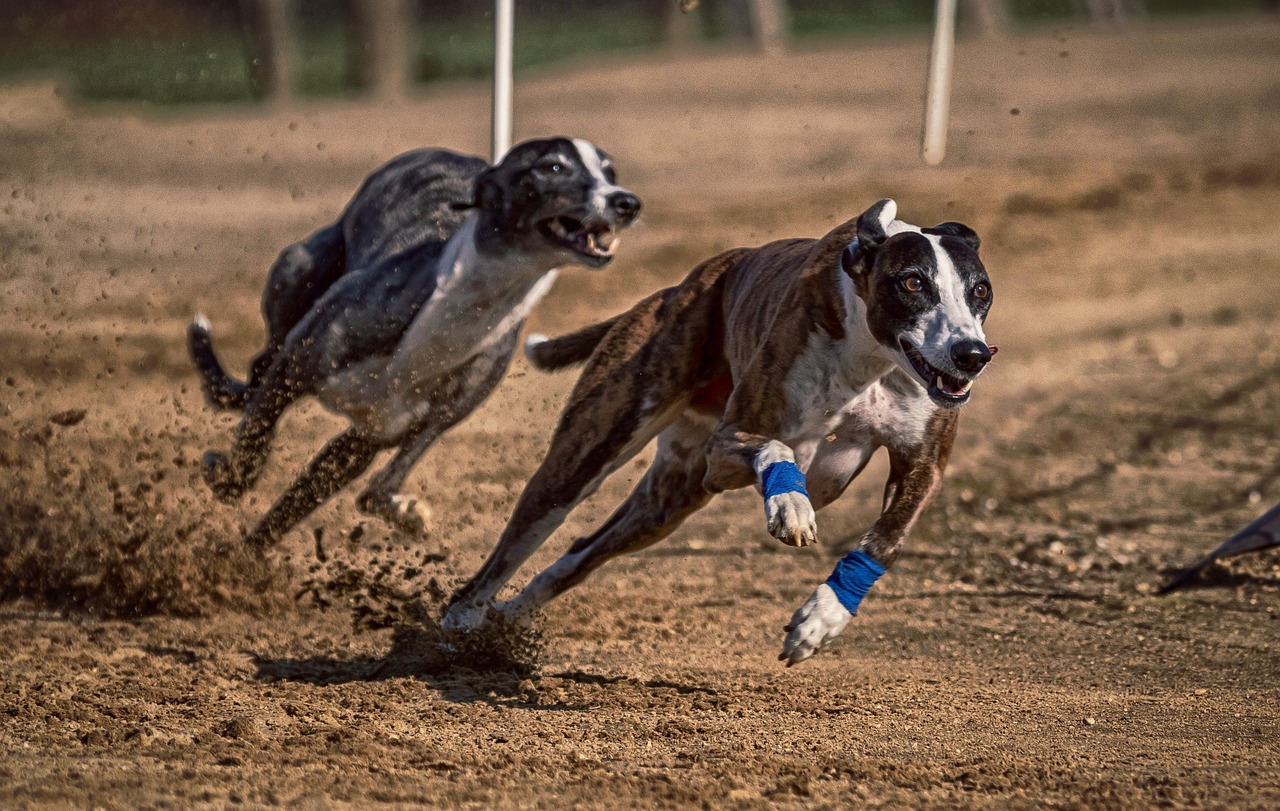 Today, commercial greyhound racing exists in eight countries but other dog races occur in many other countries too. These races usually have several criteria such as legalized gambling, state of the racetracks, number of dogs participating, association memberships, fees, among other things. In 2020, there were 21 registered stadiums for greyhound racing in the UK. There are also four additional racetracks regulated by other bodies. They use the tote system and have on-course betting. Many people opt for horse racing betting today when using online sportsbook sites in the UK. Dog race betting can sometimes become tricky and you don’t always have a pro next to you to explain things.

Medical care and life after racing

The medical care of a dog is primarily the responsibility of its trainer. In the UK, racetracks must have a veterinary surgeon and veterinary room facilities on site. The greyhounds need annual vaccines against several diseases to minimize the risk of any potential outbreaks. Before each race in the UK, the dogs have to pass a veterinary inspection. The industry is actively working against any doping cases. Dogs that cannot produce a urine sample for multiple consecutive matches can be ruled off from the tracks. In the case of a positive test, criminal penalties, nullification of the racing license, and a permanent ban can be applied to the dog’s trainer.

Greyhounds retire after they reach the age of 4-6 or if they cannot compete anymore. There are a lot of adoption and rescue groups that work with these dogs and try to find them a new home. In the UK it’s available for the public to see the records of where the retired dogs reside. Several organizations, such as British Greyhounds Retired Database, Adopt-a-Greyhound, Greyhound Pets of America try to see to the adoption of these dogs. Many racetracks even have their adoption programs. The establishment and promotion of these organizations are a huge step forward in the history of greyhound racing in the UK and elsewhere. 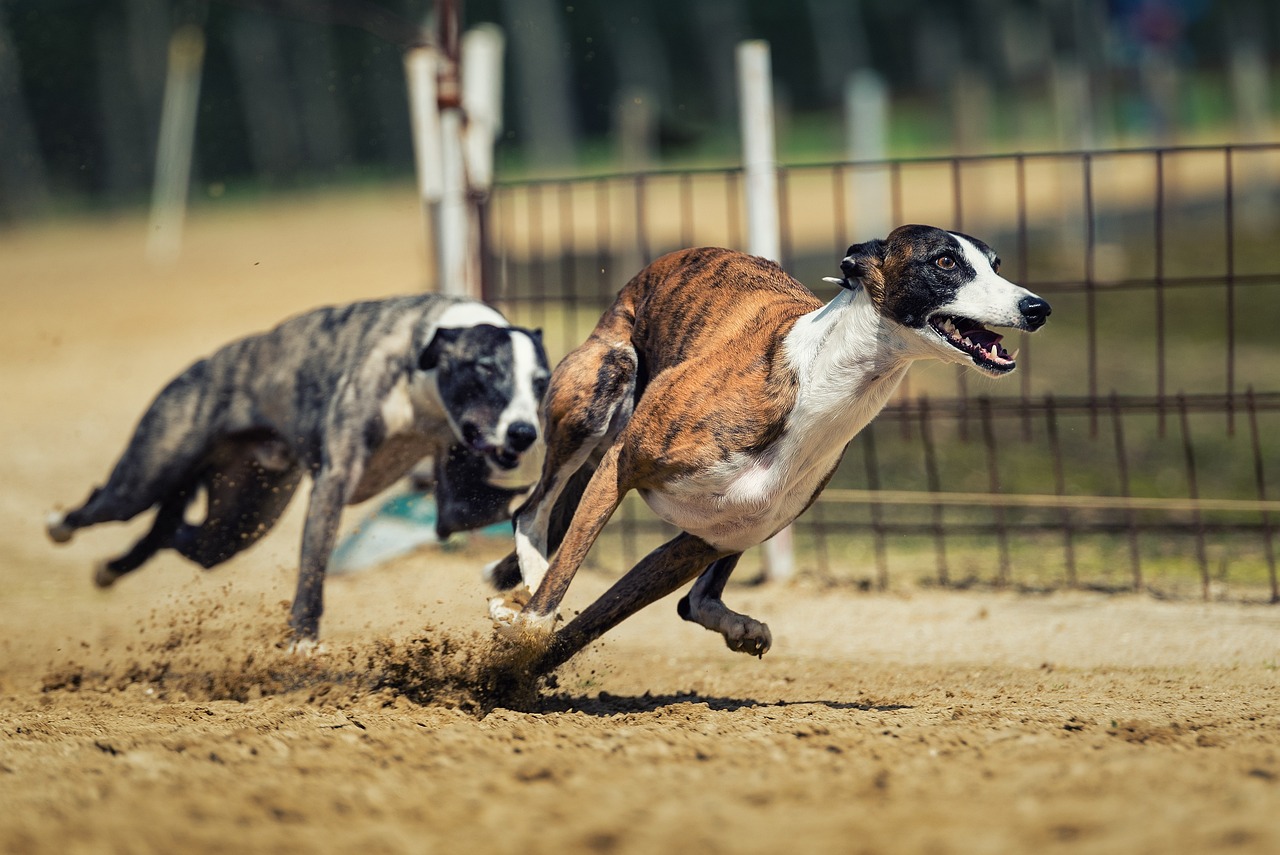 Legality and popularity of greyhound racing

History of greyhound racing in the UK and Ireland

There are currently 19 registered racecourses in Great Britain that are regulated by the Greyhound Board of Great Britain. There are three additional independent racetracks but the number of participants is unknown due to not needing central registration. Northern Irish racetracks are not related to the Greyhound Board of Great Britain. In the history of greyhound racing, there were more than 250 racetracks in the UK, both licensed and independent. There are multiple competitions in the UK, the biggest one being the Greyhound Derby with minimum prize money of £50.000. Outside of these tournaments there are also graded racing and strict rules involving racing jackets, starting colors, and other things. Multiple online sportsbook sites in the UK have dog race betting, for example, Bet365 Sportsbook.

Greyhound racing is also popular in Ireland and there are 17 operating racetracks, two of these are in Northern Ireland. Both on-course and off-course betting are available at most modern facilities. The history of greyhound racing in the UK affects Ireland too because the first racing event resulted in the building of multiple stadiums in both countries. The Irish Greyhound Derby is the biggest competition in the country but there are more tournaments. An interesting fact is that most of the greyhounds racing in the UK are from Ireland.

Dog racing is slowing down in the US

Greyhound racing is illegal in 41 US states, but wait because it gets more complicated. Today, only Arkansas, Iowa, and West Virginia have active dog racing tracks. However, the racetracks in Arkansas and Iowa are in a phase-out process and will close by the end of 2022. The remaining two racetracks in West Virginia will be the only operational ones after that, officially. The following states don’t have active race tracks but dog racing is still legal: Alabama, Connecticut, Kansas, Oregon, Texas, Wisconsin. Dog race betting is legal in Alabama, Arizona, Colorado, Connecticut, Idaho, Louisiana, Massachusetts, Montana, Nevada, New Hampshire, New Mexico, North Dakota, Oregon, Rhode Island, South Dakota, Texas, Wisconsin, and Wyoming.

Australia and New Zealand are both big markets

Australia also has a significantly large greyhound racing industry. Australian states and territories each have a greyhound racing body that regulates everything from races to the welfare of the dogs. Recent legislation now bans greyhound races in Canberra, the capital. Currently, there are 59 active racetracks in Australia, 29 of these are located in New South Wales. Australia is one of the biggest markets for greyhound racing and the sport is still quite popular. The Million Dollar Chase is the richest greyhound racing event in the world but there are many others in the country as well. A lot of adoption programs exist in Australia too, with many more on the way.

Greyhound racing is also a popular sport in New Zealand and there are ten racing clubs. These clubs are responsible for the racetracks in the country. Many dogs are imported from Australia each year. There are ongoing events with the regulations and methods involving greyhound racing in New Zealand, but the sport remains legal for now. Betting is also legal in the country.

Why the history of greyhound racing in the UK is important

A lot of things can change over a hundred years. Dog racing in the world has changed too. The sport is becoming less popular and many countries are passing laws against it. Still, there is a relatively big market for these races. Betting on dog races is similar to betting on horse races. They use the same betting system and people enjoy both of them. Bet365 Sportsbook has both types of races. Even with the current decline of the sport, greyhound racing remains popular on online sportsbook sites in the UK.

Greyhound Racing Goes To The Dogs In London

Discuss The History of Greyhound Racing in the UK | User Rating

2022 Monte Carlo Rally Odds: Who Will Win the Season Opener?